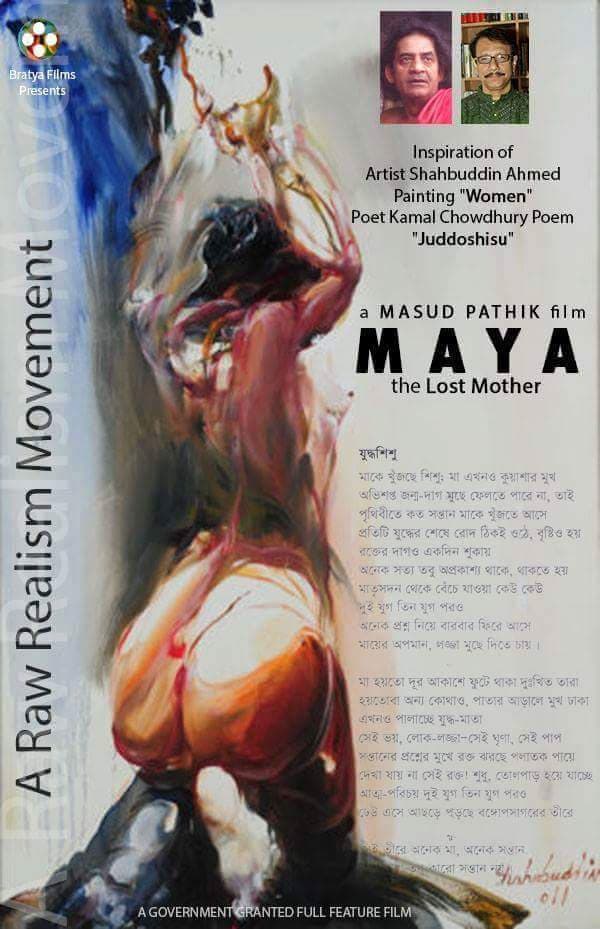 Its an amazing production by Masud Pathik Maya, the lost mother is not just a film on focusing the document but here, it has some rays of insights of a poet, to approach the truth in utter dimensions of many which has added all the possible esthetics of arts in a same basket of excellencies. Most profoundly the, film has an extraordinarily dealt cinematographic all the featuring together with a depth of sensualities that move an audience of psychological thirsts to be revived in a journey of illusive reality of harsh truth of tyrannies but in a very poetic dealing with images and beauties that will jolt the hearts of many and of course in all the lights of narrations of a true narrator of events of Justice and feelings, and this is the most momentous characteristics of this film so far in the history of Bangladeshi liberation war based film, where the form of making to story progression are so touchy and vibrant that, even a second of silent in running time of the film will certainly make you to think so many more of collages words and sounds. The prime plot in this film, to a war mother naming maya was fabulously imaged to picture suffocations of being a mother in the critical landscape of reality that portraits the perspectives of a Society where the fights and odds are the contrast to the senses of independence for what a nation dreamt for ever, but the irony is there when the freedom that was last for, and for what an ocean of sacrifices are done ultimately the questions of identity and cast and blood its splitted towards that very harsh a same sided tusks and brutal aprroches from all walk of life and being. This reality is profoundly a truth but they way Masud pathik dealt all the characters and story is remarkable. In this particular film, most importantly the featuring the folk and their fellow thoughts and the ideas of an revel women that is discriminated in all, and the even scared mistakes of fate of an women is regarded as crime of sole by her is the core truth. Raw realism produces the reality beyond reality in such a platform of metaphorical play ground of modern film. Masud pathik himself a poet thats why its so expected a genre to him to be seen in reflection to all his creature, and no doubt in this film, the audience will have the same as from his previous works, but to me Maya the lost mother is a complete art work where audience will have an idea with all the fresh poetic sensuality to approaches the truth behind our struggle of the mother and women to the sense of as a whole, and the motion and course of a Society like us where the independence, and the glorious war and sacrifices for it will tell you a different story so far, and that’s the very story is eternal a struggle for mankind even in the flourishing moments of civilization and epoch of human mind and ground. Masud pathik, in this film is like that very poet who can de-familarise an object with another of far but in so deep and more in touchiness of ambiguity. That’s its seen in the film even a dog of no words speaks as a man of magical reality, and literally in this film, masud pathik has composed all the rustic play ground and colour in so a vibrant way that’s another credit of him as a film maker, where he is easily considered to be a man of all integrities and commitments to his own culture and genealogy. Its a trademark of Masud pathik that he represents the folk and flora and fauna in his work so relevantly, and in ‘Maya the lost mother’ its also seen in more gorgeous in scene and sounds. To me, I think the film is a successful documentation of state of our liberation war but not in those so called story telling and making of only in some familiar boundaries of Middle class crisis, political inflictions and geopolitical expects, but its an over all ideological crisis that confines the women and their rights and spaces in the senses of all paradoxes of independence. And masud pathik in his fim ‘maya the lost mother’ can successfully capitalize the liberation war and aftermath to a war mother in a Society of real world in a classical way but so poetically.

THE BOYS IN THE BAND REVIEW : PACKS A PUNCH